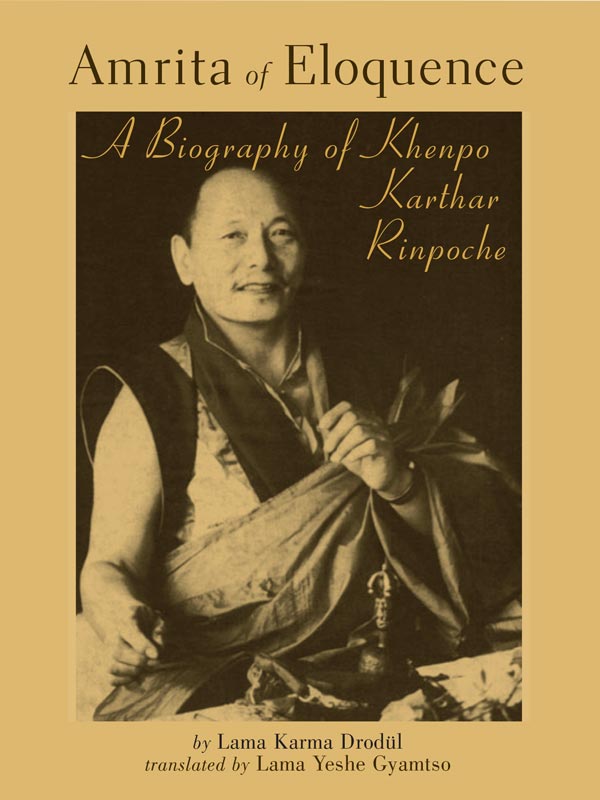 A Biography of Khenpo Karthar Rinpoche

Amrita of Eloquence is beautifully written by Lama Karma Drodhul (Rinpoche’s nephew and disciple), and elegantly translated by Lama Yeshe Gyamtso, with a foreword by the 17th Gyalwang Karmapa, Ogyen Trinley Dorje, and prefaces by the Ninth Traleg Kyabgon Rinpoche and the Ninth Khenchen Thrangu Rinpoche. Originally composed by Lama Karma Drodhul at the request of the abbot of Thrangu Monastery, Lodroe Nyima Rinpoche, for Thrangu Monastery in East Tibet. Though it is composed in the traditional style of Tibetan spiritual biographies, it is nonetheless completely accessible to modern readers. The importance of such biographies cannot be overestimated: studying the life of one’s guru gives rise to spontaneous devotion and that leads to awakening.

Born in eastern Tibet in 1924, Khenpo Karthar Rinpoche was one of the great masters of the Karma Kagyu tradition. Rinpoche, who received most of his training and education in Tibet before the Chinese invasion, was highly accomplished in meditation, philosophy, and monastic arts. As abbot of Karma Triyana Dharmacakra Monastery (KTD) in Woodstock, New York; spiritual guide of thirty-five Karma Thegsum Choling (KTC) affiliate centers; and retreat master at the Karme Ling Retreat Center in Delhi, New York, Rinpoche touched the lives of thousands of students. He passed into parinirvana in Karme Ling on October 6th, 2019.

Part One: Virtue in the Beginning

Part Two: Virtue in the Middle

Part Three: Virtue in the End