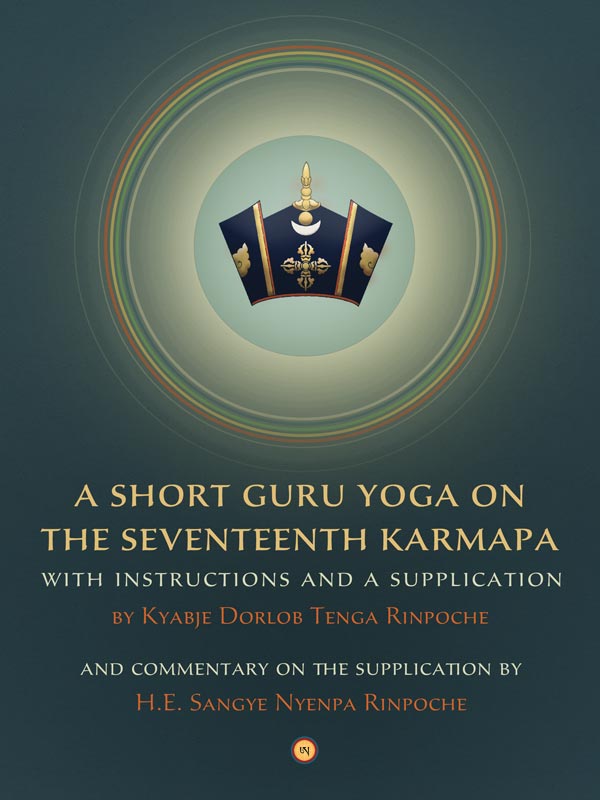 A Short Guru Yoga on the Seventeenth Karmapa

With Instructions, a Supplication and It's Commentary

This Short Guru Yoga on the Root Lama Karmapa by the Third Kyabje Dorlop Tenga Rinpoche is a guru yoga for making your own body, speech, and mind inseparable from three vajras of body, speech and mind of the Seventeenth Gyalwang Karmapa. The text encapsulates the meaning in a few words and is easy to practice regularly. Originally, Tenga Rinpoche asked the Gyalwang Karmapa several times to write his own short guru yoga. The Karmapa said he would look into it, but did not write one. Later, Kyabje Rinpoche himself prayed with one pointed faith and devotion and wrote this short guru yoga. He showed it to the Karmapa and asked whether it would be permissible to use it for practice, and the Karmapa gave his blessings, saying it would be permissible to use this text for practice. Tenga Rinpoche also composed a melody for it, which is included in the EPUB file.

The Yearning Song of Remembering the Guru is a supplication that is related to the guru yoga of the Gyalwang Karmapa. One night when Kyabje Tenga Rinpoche was at the Benchen Dharma Center in Belgium, he had a dream in which he remembered his root guru the Karmapa repeatedly and, unable to bear it, shed many tears. He wrote this supplication with the devotion of seeing his guru as an actual buddha. The commentary on text was written by the Tenth Sangye Nyenpa Rinpoche at the request of the retreatants of Benchen Retreat Center.

The Yearning Song of Remembering the Guru
Kyabje Tenga Rinpoche

A Short Guru Yoga on the Seventeenth Karmapa

This website uses cookies to improve your experience while you navigate through the website. Out of these cookies, the cookies that are categorized as necessary are stored on your browser as they are essential for the working of basic functionalities of the website. We also use third-party cookies that help us analyze and understand how you use this website. These cookies will be stored in your browser only with your consent. You also have the option to opt-out of these cookies. But opting out of some of these cookies may have an effect on your browsing experience.
Necessary Always Enabled
Necessary cookies are absolutely essential for the website to function properly. This category only includes cookies that ensures basic functionalities and security features of the website. These cookies do not store any personal information.
Non-necessary
Any cookies that may not be particularly necessary for the website to function and is used specifically to collect user personal data via analytics, ads, other embedded contents are termed as non-necessary cookies. It is mandatory to procure user consent prior to running these cookies on your website.
SAVE & ACCEPT