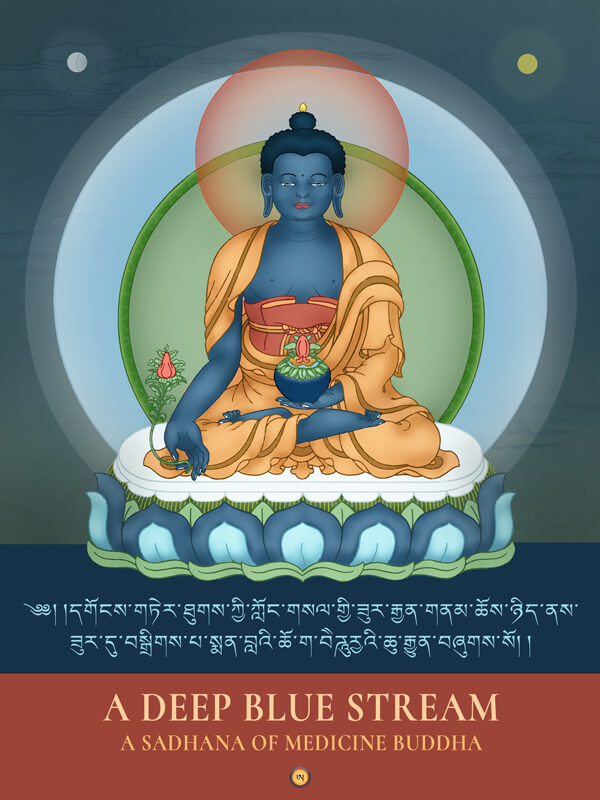 A Deep Blue Stream. A Sadhana of Medicine Buddha

A Sadhana of Medicine Buddha Compiled from the Luminous Expanse of Mind Treasures, Found within the Sky Dharma
དགོངས་གཏེར་ཐུགས་ཀྱི་ཀློང་གསལ་གྱི་ཟུར་རྒྱན་གནམ་ཆོས་ཉིད་ནས་ཟུར་དུ་བསྒྲིགས་པ་སྨན་བླའི་ཆོ་ག་བཻཌཱུརྱའི་ཆུ་རྒྱུན་བཞུགས་སོ།།

A Deep Blue Stream (དགོངས་གཏེར་ཐུགས་ཀྱི་ཀློང་གསལ་གྱི་ཟུར་རྒྱན་གནམ་ཆོས་ཉིད་ནས་ཟུར་དུ་བསྒྲིགས་པ་སྨན་བླའི་ཆོ་ག་བཻཌཱུརྱའི་ཆུ་རྒྱུན།) is a practice of Medicine Buddha that comes from the mind treasures of the terton Namchö  Mingyur Dorje (1645–1667) and belongs to his Sky Dharma (namchö) treasury. It was Karma Chakmé (1616–1678) who compiled the present practice from these texts. In the spiritual history of Tibet, the lives of these two masters are inseparably intertwined. This first Karma Chakmé, also known as Rāga Asya, trained with the most renown Kagyu and Nyingma masters of his time, including the 10th Karmapa, Chöying Dorje, (1604–1674) with whom he traveled for a year and a half as a close disciple, receiving many teachings, empowerments, and Mahamudra instruction. A prolific writer, Karma Chakmé’s writings fill some sixty volumes of texts, and his Supplication to Be Reborn in the Pure Realm of Sukhavati is famous throughout the Tibetan Buddhist world.

This Medicine Buddha practice that comes from these two master’s combined Dharma is filled with their blessing. The text is concise while encompassing all that is needed to bring spiritual, emotional, and physical well-being. As other yidam deity practices, it can lead to full awakening.

This translation by Michele Martin made following the explanations given by Khenchen Thrangu Rinpoche and Khenpo Karthar Rinpoche, and it was revised in April 2020 for this new ebook publication.

Notes: The word vaidurya, transliterated from Sanskrit, is found in both the title and the text. It is usually translated as “lapis lazuli.” Recently, however, research has shown that it refers to a class of precious stones known as beryl, which comes in different colors. Green beryl gems are known as emeralds, and deep blue beryl (the color intended here) is named “maxixe.” Given that few would know the term and that it would not link easily to experience, this translation uses “deep blue,” what the gems are meant to signify, instead of “lapis lazuli” or “blue beryl.”

Since it belongs to the path of the secret mantra, this sadhana should be practiced only by those who have received the appropriate empowerment, transmission, and instruction from a qualified lama.