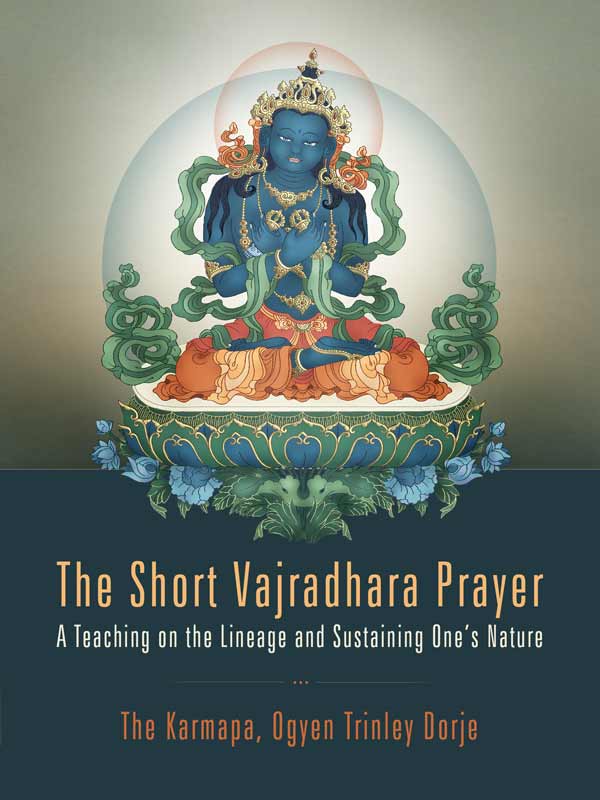 A Teaching on the Lineage and Sustaining One’s Nature

"The Dorje Chang Tungma is probably the most well-known of the Kagyu prayers, traditionally recited before teaching sessions and often recited by practitioners as part of their daily practice. Nearly everyone knows this prayer by heart, but such familiarity can be dangerous. It is all too easy to recite the prayer mindlessly, like a parrot, without focusing on the words or reflecting on the meaning of what we are saying. By studying it, we should gain deeper understanding and be able to appreciate its profundity more fully.

"In so many ways, it is much more than an ordinary prayer. It includes all the important stages of the training in mahamudra: revulsion for samsara, renunciation, devotion to the guru, undistracted meditation, and so forth. As such, it is like a pith instruction.

"In the beginning, the prayer recalls all the lineage masters of the Kagyu. When we talk about lineage, we mean more than the one-to-one, physical transmission from teacher to student. Lineage is an unbroken spiritual line that begins with the source and continues uninterrupted from generation to generation. Not only that, as we recite the body of the prayer, we are reminded of the core practices of mahamudra: revulsion is the legs of the practice, uncontrived devotion is the head of the practice, nondistraction is the core of meditation practice, and so on."

The Gyalwang Karmapa granted these teachings as part of the 29th Kagyu Monlam in Bodhgaya, India, 26-28 February, 2012. This auspicious event was attended by around 8,000 participants, principally, members of the Himalayan Sangha but also included devotees from around the world. We are grateful to Ringu Tulku Rinpoche for interpreting for His Holiness on this occasion. For this publication, we asked Lama Eric Trinle Thaye to retranslate the teachings from the recordings in order to capture the finer details, all of which are not possible to transmit in live interpretation.

The root text of The Short Vajradhara Prayer presented here differs from the rendition in The Kagyu Monlam Book. This version was recently retranslated by Khenpo David Karma Choephel, Lama Eric, and the Marpa Translation Society in residence at the Thrangu Sekar Retreat Center in Nepal. It was put to meter so that the prayer can be easily sung in English.

A Teaching on the Lineage and Sustaining One’s Nature

Part One: Introduction to the Prayer
Part Two: The Field of Accumulation

Auxiliary Comments by the Gyalwang Karmapa During the Teachings